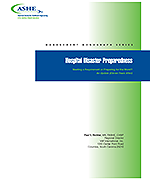 Meeting a Requirement or Preparing for the Worst? An Update (Eleven Years After)

From the time this document was originally published as an ASHE Healthcare Facilities Management Series Document # 005146, dated August 1997, so much has happened around the world in regards to natural and man-made disasters that the author recognized a need to publish an update. Though the basics of the original document remain valid and unchanged, this Management Monograph will focus on various new provisions that will help hospitals in further “preparing for the worst.” Even with the recent catastrophic disasters that produced many deaths, some of our nation's hospitals believe that dollars spent on emergency preparedness can be better utilized in other areas. Since 2001, the Federal government has provided billions of dollars to hospitals and public health departments to plan, equip, train and exercise for the next event. After the Twin Towers fell in New York (9/11), the excuse was “that only happens in big cities.” When Hurricane Katrina brought devastation to parts of the Gulf of Mexico coast, it was said “that only happens in coastal areas.” When an earthquake devastated portions of the country of China, it was said “that only happens along seismic fault lines.” Then in the spring of 2008, two hospitals in different states, located in rural cities, along were directly hit by tornados. All of a sudden, the excuse makers were silenced. The Joint Commission in 2008 developed rigorous standards for accredited healthcare organizations to meet. In 2009, Emergency Management will become its own chapter in Joint Commission manuals. Those who license, regulate and accredit healthcare organizations have become very intense about emergency management. Now is the time for hospitals (no matter where they may be located) to take heed and understand that individuals who receive care within a healthcare facility expect those providing that care to be prepared to take whatever means necessary to protect them from all events whether expected or not. In other words, to be “prepared for the worst.”